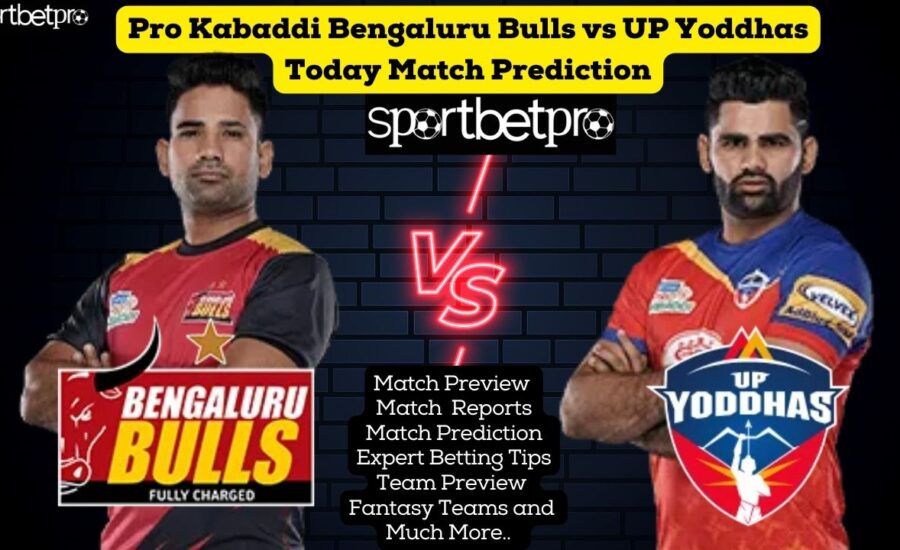 The second match of Super Sunday will be played between season 6 champions Bengaluru Bulls and UP Yoddha, the game will start at 8:30 Pm, and it will be played at Gachibowli Indoor Stadium, Hyderabad. You can watch the live action on Star Sports and Disney+ Hotstar.

This game is going to be very crucial for both teams, we can expect a nail-biting fight between these two champion sides. Their Last bout was a bit unlucky for the Bulls when the Yoddhas defeated them by 7 points.

Both teams are performing very well in this season of Vivo Pro Kabaddi League, from standing at the bottom to ruling the points table we have seen an amazing fightback from both sides.

This match is a decider for both sides, winning this match will make their place secure in the playoffs. Get yourself ready for this ultimate action on the night of Sunday from 8:30 PM.

One of the best teams in this season of the Pro Kabaddi League is going to play its next game against UP Yoddha. This game is going to be very difficult for the players. Their last defeat against Jaipur has overshadowed their past performances and the team is looking diffident on the mat.

The bulls will try their best to win the game and take their revenge, we can expect them to take early leads. Currently, they have played 19 games and have won 11 out of them.

We can expect good performances from Bharat and Vikash Kandola, this duo can wreak havoc in the opposition’s defence side. Eyes will be on Saurabh Nandal and Mahender Sigh these two can stop Yoddha’s raiders from getting points.

The Yoddha side is looking for winning back-to-back games and making their place in the playoffs. This game is very important for them as this single win can help them in reaching the semi-finals.

UP will try to win their remaining games and finish in top two of the points table. Their last game has surely boosted their confidence and they will try their best to defeat Bengaluru Bulls.

If we talk about players then we can expect good performances from star raider Pardeep Narwal and Narender. Both are big game performers, their experience will surely help the side in winning games at such a crucial stage. The defence side is led by Nitesh Kumar and Gurdeep. Sandeep Narwal can play a very crucial role in today’s game.

Both the teams are good contenders for the PKL title, thus, it becomes hard to predict the match winner. If you want then you can bet on this live game of PKL and can win real cash in Kabaddi by using the PKL betting sites.