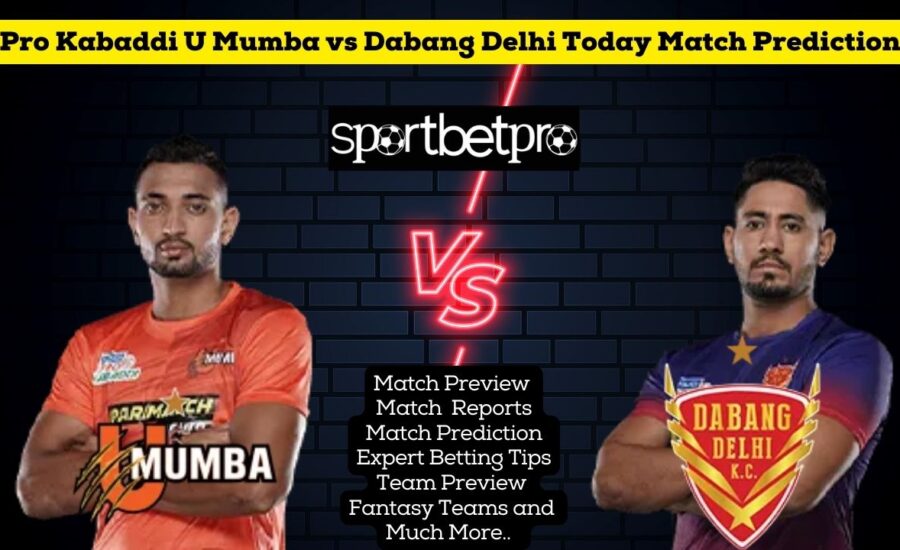 After two mighty Monday games, today we will witness two more games of thundering Tuesday. This time U Mumba and Dabang Delhi are going to meet each other for the second time in PKL.

Both teams have faced each other once in the tournament so far. U Mumba was badly defeated last time by 14 points. Match no. 122 of Vivo PKL will be a battle between U Mumba and Dabang Delhi, The match will start at 7:30 Pm, it will be played at Gachibowli Indoor Stadium, Hyderabad, and for catching the live game you can head on to Disney+ Hotstar.

U Mumba will face Dabang Delhi in their 21st game of this season, the race to qualifiers is getting tough day by day and only two places are left to be occupied. Mumba is placed in the 8th position with 9 wins while Delhi is enjoying the 6th position on the table with 9 wins in the 20 games they have played.

Both teams will try their best to win this game and get one step closer to the playoffs. This Kabaddi season is going to be the best money-making option for the punters. You can also place bets on your favourite team by using the Kabaddi betting sites.

The PKL 2 champion U Mumba is going to play its 21st game in the tournament, their last few games were a bit unlucky for them, after trying so hard they were defeated in 4 out of 5 games.

After winning the second season of the Vivo Pro Kabaddi League, the team never rose again and ended up in the last benches of the points table. U Mumba is one of the most popular teams in the league, this time they will try to win the tournament by defeating every team on the mat.

If we talk about players then Mumba has relied on young raiders like Guman and Ashish. This raiding duo has impressed everyone in this season.

The champion squad was looking perfect this season with back to back wins in the tournament. Things changed for them in the second half and they faced a series of defeats.

The next game against Mumba is going to be very tough for them, they will try their best to win this mini-quarter final game and get closer to the playoffs. The defence section of the team needs to work hard and try to take early leads in the starting.

Eyes will be on the main raider Naveen Kumar he will have to give career- best performance if the team wants to defeat Mumba. We can expect good performances from Ashu Malik and Vijay Malik.

Both teams will have to win this game at any cost, this match is going to write their fortune in the Vivo PKL Season 9.

Our SportBetPro experts have analysed both teams and players, we predict Dabang Delhi to win this bout.